I tried to create a new environment instance using Anacoda of Python 3.6.6. It looks like it installed okay. I then activated the environemtn, and followed the directions for installing Obspy via Anaconda 2. It looked like it did everything okay with no errors, too. But then, I opened Python and tried to import Obspy and received an error message: No Module named ‘decorator’.
I’ve tried it twice, and both times, it fails to find the decorator module. I’ve explicitly attempted to install it, but Anaconda keeps reporting that it’s already installed.

Any thoughts about this showstopper? As we move away from 2.7, I need to re-write my Obspy tools, especially since I extensively use formatted print statements and stuff like that. But first, I need to figure out how to get Obspy to successfully install.

You probably need to get obspy from this site. I had experienced similar issues when installing from conda.

PyPi does not include wheel file for windows 64, therefore, VC++ V4.00 has to be installed if you want to install Obspy from PyPi.

When installing it for Python 3.6 >> go to individual components and select VC++ 2015.3 V14.00 + CRT SDK + windows 8.1 SDK and remove everything else, as this is the version of VC++ python 3.6 is compiled by. Then you will be able to install obspy into your machine from PyPi. 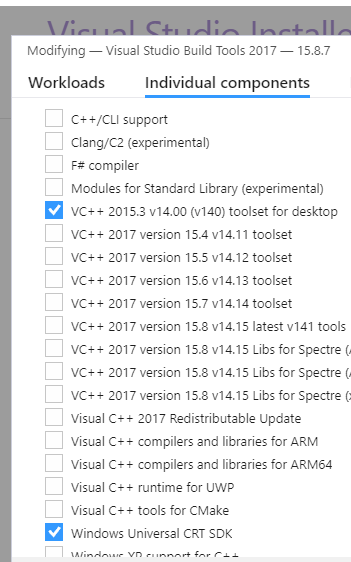 The whole idea of us providing conda packages is that such contortions should not be necessary. The obspy conda packages should work, if they don't we need to sort it out, but the original report seemed rather like maybe a "decorator" packaging problem, or some env variables getting in the way, confusing Python and making it not find the installed decorator module.

PyPi does not include wheel file for windows 64, therefore, VC++ V4.00
has to be installed if you want to install Obspy from PyPi.